First off, a big thank you to all those who have read the first part of this series!  If you haven’t read it, I invite you to read it now before continuing, as ~Part 2 will build upon it and dive a bit deeper.  Ready to get started? Let’s kick things off by discussing the implicit context load.

The Implicit Context Load is one of those pieces of functionality that can very easily be ignored but is incredibly valuable.

Simply put, the implicit context load is just a way of linking your jobs to a hardcoded file path or database connection to retrieve your context variables. That’s great, but you still have to hardcode your file path/connection settings, so how is it of any use here if we want a truly environment agnostic configuration?

Well, what is not shouted about as much as it probably should be is that the Implicit Context Load configuration variables can not only be hardcoded, but they can be populated by Talend Routine methods. This opens up a whole new world of environment agnostic functionality and makes Contexts completely redundant for configuring Context variables per environment.

You can find the Talend documentation for the Implicit Context Load here. You will notice that it doesn’t say (at the moment…maybe an amendment is due :)) that each of the fields shown in the screenshot below can be populated by Talend routine methods instead of being hardcoded.

Before I go any further it makes sense to jump onto a slight tangent and mention JASYPT. JASYPT is a java library which allows developers to add basic encryption capabilities to his/her projects with minimum effort, and without the need of having deep knowledge on how cryptography works. JASYPT is supplied with Talend, so there is no need to hunt around and download all sorts of Jars to use here. All you need to be able to do is write a little Java to enable you to obfuscate your values to prevent others from being able to read them in clear text.

Now, you won’t necessarily want all of your values to be obfuscated. This might actually be a bit of a pain. However, JASYPT makes this easy as well. JASYPT comes built-in with some functionality which will allow it to ingest a file of parameters and decrypt only the values which are surrounded by ….

This means a file with values such as below (example SQL server connection settings)…..

…..will only have the “TalendContextPassword” variable decrypted, the rest will be left as they are.

This piece of functionality is really useful in a lot of ways and often gets overlooked by people looking to hide values which need to be made easily available to Talend Jobs. I will demonstrate precisely how to make use of this functionality later, but first I’ll show you how simple using JASYPT is if you simply want to encrypt and decrypt a String.

In the example I will give you in part 3 of this blog series (I have to have something to keep you coming back), the code will be a little harder than below. Below is an example job showing how simple it is to use the JASYPT functionality. This job could be used for encrypting whatever values you may wish to encrypt manually. It’s layout is shown below…. 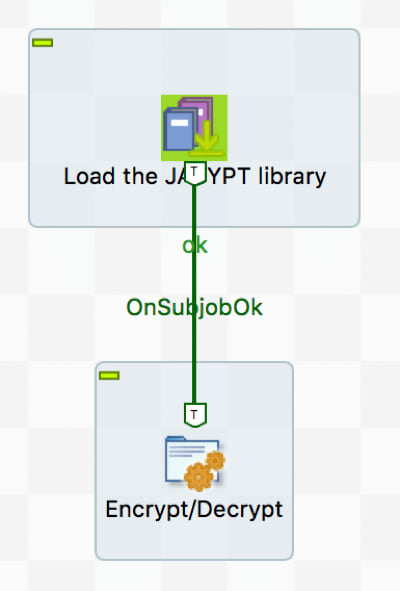 Two components. A tLibraryLoad to load the JASYPT Jar and a tJava to carry out the encryption/decryption.

The tLibraryLoad is configured as below. Your included version of JASYPT may differ from the one I have used. Use whichever comes with your Talend version.

The tJava needs to import the relevant class we are using from the JASYPT Jar. This import is shown below…..

The actual code is….

Now to make use of the StandardPBEStringEncryptor I used the following configuration….

The actual code (so you can copy it) is shown below….

In the above it is all hardcoded. I am encrypting the String “Hello World” using the password “BOB” and the algorithm “PBEWithMD5AndDES”. When I run the job, I get the following output….

These snippets of information are useful, but how do you knit them together to provide an environment agnostic Context framework to base your jobs on? I'll dive into that in Part 3 of the best practices series.