What is Infrastructure as Code (IaC)?

What if you could automate the process of building environments, pushing out software changes, and making changes to infrastructure? What if on top of automation, it was easier to codify and view an incremental history of any adjustments to your environment?

Infrastructure as Code (IaC) is your answer. Learn what IaC really means, the benefits it offers, how it works, and what kinds of tools are available to assist in deploying IaC.

How Infrastructure as Code is changing the speed of business

Infrastructure as Code (IaC) is a way to automate provisioning software, networks, and virtual machines.

And IaC makes DevOps — an IT strategy aiming to deliver projects quickly and accurately — possible by bringing the infrastructure team onboard with the development team. This is necessary to aid programmers in continuously testing and deploying software updates in real time. With IaC, the project team is able to release project code in carefully managed iterations, such as agile sprints.

New tools like SaltStack, Puppet, Chef, and Ansible have let administrators define what software needs to be installed where and then push those changes to multiple servers. It lets the administrator and architect model the entire system. Hence the name, Infrastructure as Code, is an abstract representation of the physical and logical environment.

Benefits of Infrastructure as Code

The word script usually means basic Linux commands, such as copy (cp). Those have limited, or no feedback loops, so it's not always possible to know when a command worked or failed.

Further, without extensive coding there is no ability to create dependencies between objects. That's an important piece because you would not want to install two instances of a database on a machine if the previous step to add a network interface failed. While you could code that with a bash script, it would make for very long code that would be difficult to understand and maintain.

2. Alignment with the development team

Infrastructure must be rolled out in an organized fashion to meet both the schedule and requirements of the development project. Consider, for example, a company that is writing an order entry system.  It is necessary to plug infrastructure tasks into software development and configuration. With a large team of testers, managers, developers, and system administrators, IaC allows for complete transparency and version control amongst the team.

Automated testing takes two forms: manual and automatic. Even many manual tasks have now become automated because of advances in that code too. But still, testing has to come after coding, depending on the nature of the test. Then there is testing that takes place outside of coding, like stress testing.

All of this requires that a test environment be set up. So, in the case of someone using the AWS cloud, there is a need to build out a target environment that is different than production. The software is pushed out there, meaning it is installed and configured, and storage and networks are set up. But Amazon AWS charges for all of that hardware. So at the end of the test it is necessary to shut all of that down and delete the storage too, to avoid monthly surcharges. This task is given to the IaC developers who can automate these tasks.

There are no open source repositories for bash or c shell scripts because they would not be very useful as they are limited in function. But there are plenty of public, open source code examples and tools developed by the users of SaltStack, Ansible, and other IaC tools.

For example, Ansible has Modules that can be used inside playbooks. These are very specific. There are modules to work with specific Amazon objects—like S3 storage and SSH keys—and Microsoft Azure objects—like load balancers. Then there are modules for more generic tasks, like the apache2_module, which sets up and configures the Apache web server, setting up virtual hosts, adding SSL certificates, etc.

And, as we said before, their widgets and packages of code fit into the overarching system used by the program team.

So one DevOps task might be to increase swap space on server and reboot server. All of that can be done from the central mechanism. Unlike the older programming languages, the modern IaC languages can report details on their statuses to guide the next steps in the process or roll back the changes completely. That feedback can roll up into a large display that the whole team can see sitting in the project room.

These all operate on the same basic principles:

SaltStack uses YAML files for configuration, but it also lets the programmer add logical statements using the Jinja programming language. It is a mix of static and dynamic commands, with the YAML statements (static) indicating the targeted end state (declarative), and Jinja (dynamic) allowing logic and variables to insert into the flow, thus giving run-time information that varies from machine to machine.

To illustrate, look at the example below, taken from SaltStack. The Jinja code is delimited by % (percent) symbols. This lets the user mix dynamic and static statements.

The command below says to install the software package tcsh if the operating system (grains['os']) is not FreeBSD. And the statements below that tell SaltStack where to find the configuration for each of the targeted OS's FreeBSD, Debian, and other. Machine attributes are called Grains by Salt Stack.

Here is just a snippet. We designate the /etc/passed file and give it permissions and ownership. The ensure statement just means to verify the items below it, like who is the owner.

Here we look briefly as some of the main products.

SaltStack runs the salt-master service on the master and salt-minion on minions, or targets.

Configuration files are called manifests. There are many publicly available at Puppet Forge. Their hierarchy of objects are Classes, Modules, and Resource types, showing that it too is a full-blown programming tool and thus able to use all those modern tools.

Most programmers would prefer command line tools to a dashboard, as that is how they are used to working. But dashboards are helpful to give a system graphical wide view.

For example, here is one from SaltStack: 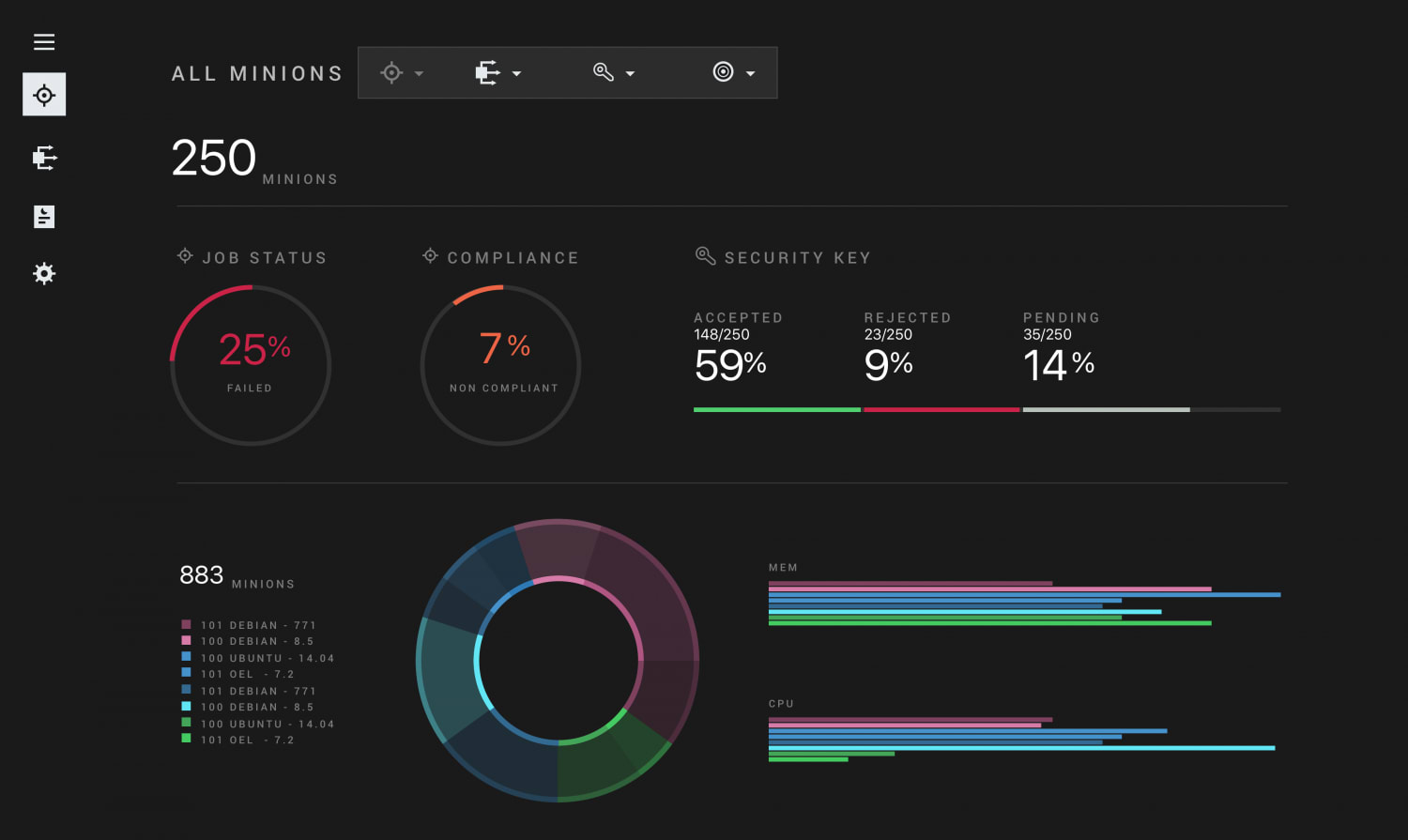 And the Chef Management Console: 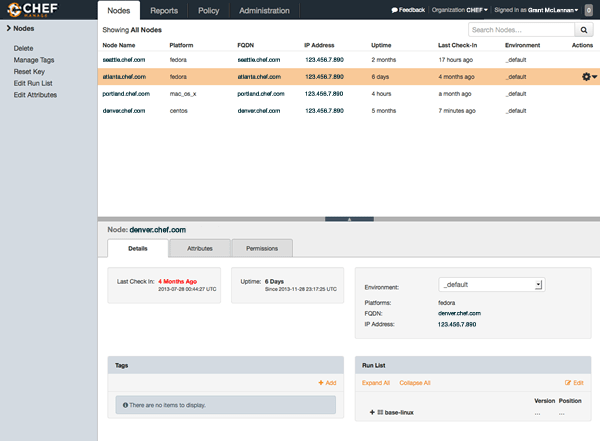 The cloud and IaC

The logistical issues related to the move from on-premises servers to the cloud has created issues that Infrastructure as Code are well suited to handle. So has the migration from the decades old waterfall approach to software development (with its long lead times for milestones) and its replacement by continuous integration, continuous delivery, and scheduled delivery of software with Ansible.

These systems only work when automation is used at each step of the project. Testing is automated more today than in the past, so it's normal and natural to add infrastructure to that automated set of processes. What was lacking in the past was development languages to do that. Now, with the cloud, those have become available.

While cloud adoption has pushed along the need for IaC, the rise of Software as a Service could reduce them as organizations move infrastructure out of Amazon, their own data center, or others, onto already-configured platforms. For example, many vendors, like MongoDB and ElasticSearch, now offer cloud versions of their products. That means responsibility for the maintenance of these systems falls to the vendor. The end user will find their access to the operating system cut off in many cases.

There are certain technical and organizational challenges with IaS:

Getting started with Infrastructure as Code

Here we have laid out the use case why organizations have adopted Infrastructure as Code and explained how IaC replaces old fashioned and incomplete scripts with modern programming languages specifically written for infrastructure management. These are a mix of static configuration and dynamic commands that speed the configuration and management of machines and containers using objects and methods, but without having to write a complete, full-blown program.

You could set up a data lab to work with one or more of these products and set your analysts to work looking at each. Then they can make an informed decision as to which might work best for your organization. But remember that each of these tools has something of a learning curve, so build time into your schedule for acclimating.

When you’re ready to move take the next step, make sure your data is ready too. Talend Data Fabric is a suite of apps that integrates and manages all of your data — easily and securely. Get more information and learn how Talend’s training and consulting services can get your data lab set up to empower the use of IaC in your team.