Handling secrets has always been a challenging and critical task within organizations. As production workloads deployed in remote clouds or following hybrid patterns are ever increasing, this problematic becomes more complex: we still want to manage secrets from a central place, using state-of-the-art security practices (encryption at rest, secrets rotation), with as less adherence on the underlying technology as possible to maximize components reusability across deployment topologies and ease testability.

Today we are open sourcing the code of our Vault Sidecar Injector component. You can start exploring it on GitHub right now.

This component is part of our hybrid secrets management solution relying on sidecars injection and kubernetes admission controller to provide a secure, seamless and dynamic experience.

Benefits to the Ecosystem

Kubernetes provides an effective but somewhat basic way to handle secrets. By default, encryption at rest is not enabled and advanced key management operations are not available. There is no signaling mechanism either upon any secrets change thus enforcing a file polling pattern on applications willing to use up-to-date credentials.

But, paradoxically, the biggest issue may lie in the “Kubernetes-native” nature of this solution: it is not the best candidate in architectures mixing legacy/non-containerized applications with Cloud Native ones. It may also not be a good fit if you want to handle secrets dispatched over a set of Kubernetes clusters.

For organizations looking to centralize secrets management among Kubernetes clusters and traditional applications, it is more relevant to adopt a technology/stack agnostic solution with full-fledged encryption and authentication options.

The Vault Sidecar Injector component allows organizations to securely and continuously fetch and push secrets to applications while still delivering a developer experience on par with Kubernetes Secrets.

Kubernetes comes with the Secret resource to allow secret creation, retrieval, deletion. As a native Kubernetes concept, it is best used to handle secrets for applications lying in the cluster. Containers consuming Secrets mounted in a volume will receive updates whenever a change is deployed in the cluster (your application should be designed to be aware of secrets rotation).

The secret itself is stored into etcd, the key/value store that also serve as the internal database for all Kubernetes configuration and administration operations.

To sum up, Kubernetes Secrets

At Talend, we are dealing with both on-premise, legacy, applications and cloud applications hosted either in managed or unmanaged environments on multiple cloud providers. The need for a centralized secrets management solution arose early on. Such solution should tick the following boxes:

Moreover, in order to minimize downtime, cloud-native apps should be alerted of any secrets change in order to have a chance to reload and apply new values without incurring a restart (what we call “dynamic handling of secrets”).

As we were assessing several technologies and products, including Kubernetes Secrets, we finally selected HashiCorp Vault as the core component of our solution. Key advantages with Vault are that it is cloud agnostic and can be deployed in Kubernetes as well as on its own. Then, using a Vault agent in combination with a template engine and leveraging some advanced Kubernetes features, we were able to give birth to what became the Vault Sidecar Injector to provide developers with a solution as easy to use as Kubernetes Secrets but a lot more powerful.

In a nutshell, Vault Sidecar Injector

As of today, it supports the following features:

After this short introduction, time to delve into implementation details!

Going deeper with some technical insights

In detail, Vault Sidecar Injector is a webhook registered against the Mutating Admission Webhook controller. This Kubernetes controller does nothing on its own but calling each registered webhook with the manifests of intercepted resources. Those webhooks are then responsible for the whole logic on how to mutate the objects.

So, all it takes is to register and implement a webhook admission server that will receive pods’ creation requests and dynamically inject Vault Agent and Consul Template as sidecars in requesting pods. Mutations are performed using JSON Patch structs.

Figure below depicts what’s happening when you submit a manifest with custom annotations managed by the Vault Sidecar Injector: 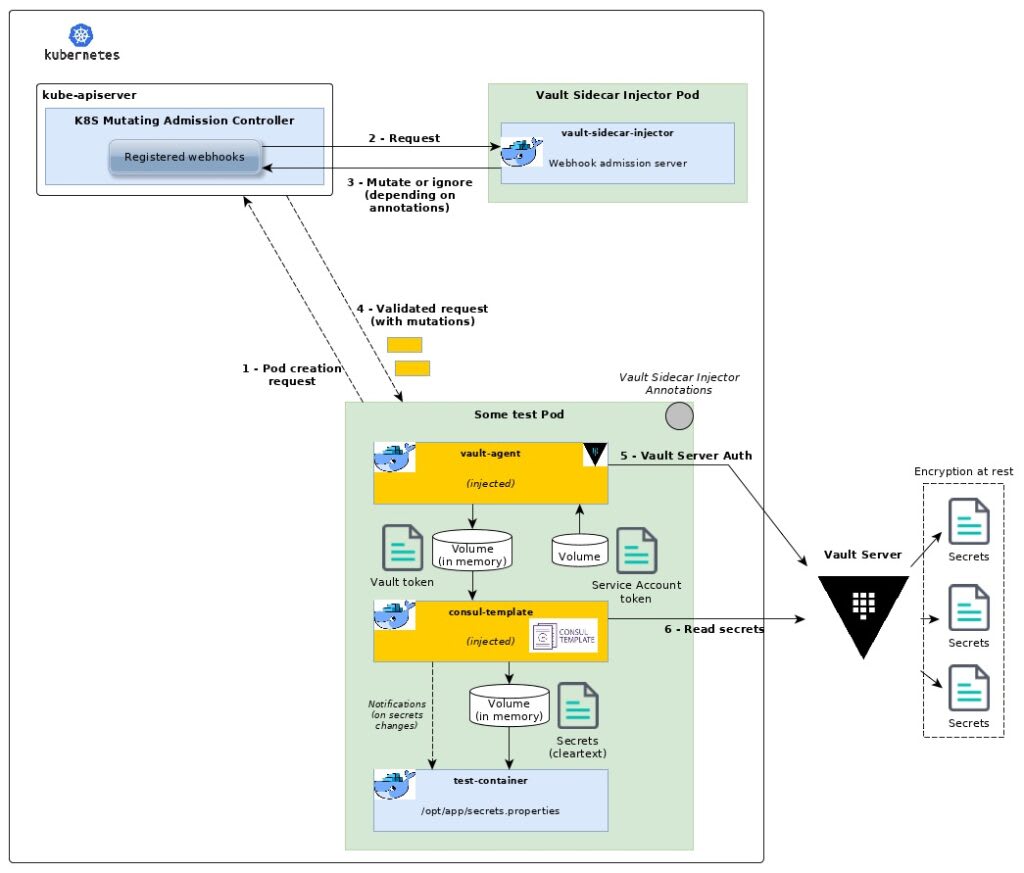 Note: in the picture above, Vault Server is deployed out of cluster. Of course, you can also deploy it inside (even in another Kubernetes cluster), only constraint is for the injected containers (Vault Agent and Consul Template) to be able to contact it.

To help you installing and using Vault Sidecar Injector and for detailed description, go look at the README on GitHub.

The repository also comes with samples of annotated workloads to allow you to quickly test the component.

Vault Sidecar Injector code is published under the very permissive Apache 2.0 license. We are already using this component internally and would eagerly listen for any improvements and suggestions from the open source community.

Here’s how you can contribute to Vault Sidecar Injector: